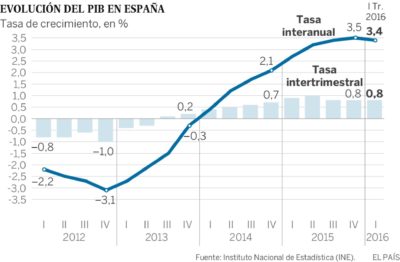 Why Spain could save Europe

The Spanish case goes against one of the tenets of economics: deflation is positive! According to the final data, Spain’s GDP grew by 0,8% on a quarterly basis in the second quarter of 2016 and by 3,2% per year.

Spain is among the best performing countries in the Eurozone, United Kingdom stops at 0,7%. Contrary to the most modern economic theories, the Spanish economy is growing (and a lot) despite the absence of a government for over 300 days and an undeniable deflation since 2013.

How is this possible? Even though central banks all over the world are frantically adopting policies to increase prices, inflation won’t take off and they are failing to achieve the 2% target that they set (a figure traditionally considered by “classic” economic theories as the perfect balance for a proper functioning of the economy). According to the Keynesian model, when prices have been falling for a prolonged period, businesses and consumers puts their purchases off, waiting for prices to drop even more.

This leads to a further slowdown in consumption and to a situation of economic stagnation where companies postpone investments. All of which leads to a recession: the nightmare of every company and every head of state. But right now the real world doesn’t seem to be following this model. Spain is a great counterexample, where, despite the fact that prices have fallen, domestic consumption is significantly increasing. Why? According to the Spanish Minister of Finance and Public Administrations, Mr Montoro, this was also possible thanks to a decrease in the unemployment rate, which went from 26% to 20% in just two years. It is obvious that if the number of people who have a job increases, the number of people who can decide to take advantage of low prices to buy goods and services will also increase. In Spain the trend is reversed: it is the increase in domestic consumption that is helping the unemployment rate, which is still way too high, but is steadily decreasing.

Today the Spanish economy appears to be one of the strongest in Europe (if not the strongest). Deflation has led to an increase in consumption – rather than a decrease of the domestic demand – but this was only possible thanks to increased employment. Of course, generalizations are a tricky business. What’s happening in the Spanish economy could very well be correlated to specific local characteristics that are absent in other countries.

However, the economic data from Spain are so striking that they beg the question of whether the fear of deflation – and the unprecedented measures taken to prevent this phenomenon – could be a case of “much ado about nothing” on a world scale. Keep an eye on Spain: a country that should not be underestimated by those who are looking to invest and work abroad.