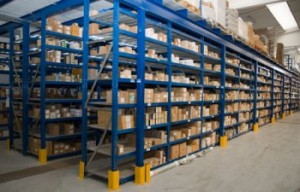 Until not long ago, if a EU company wanted to send its goods to a warehouse in Spain  to then sell them to the end customer at a later stage, they had to follow the procedure in place for Consignment Stock and VAT register in Spain.
Nowadays, pursuant to the Council Directive 2006/112/EC on VAT, it is no longer necessary to use a VAT number abroad if the goods are meant for one single customer. In that case, the EU company will have to make a simple intra-community transfer of goods directly to the end customer. That’s why it is important that the end customer should be clearly specified in the delivery note regardless of whether the goods will be “stored” for a limited time and only temporarely at a third-party warehouse.

If, however, the EU company has several customers on Spanish territory, we believe it to be more advisable and correct for the company to VAT register in Spain and follow the normal Consigment Stock procedure as described above.

However, we would like to clarify that as of today (December 2019) the above-mentioned Directive has not yet been transposed by Spain and that, therefore, the simplified regime provided for by the new legislation is not yet formally in force. Unfortunately, Spain is one of the most sanctioned countries within the European Union precisely for failing to transpose European Directives in time. The absence of a government in recent months (as well as the general political situation in which a concrete majority with real decision-making power has not managed to form in Parliament) has not helped reverse this trend.

As always, every single case and specific operation should be verified.

In principle, the simplified regime provided for by the Directive is for companies that supply only one customer. Among other things, it is important that the logistics operator should not work exclusively for the EU company in order to avoid PE problems.  That is why it is very important that the contract with the logistics operator should be verified by a Spanish tax advisor.

The Directive has not been implemented in Spain.

If a EU company has more than one customer in Spain, we strongly recommend that they VAT register in Spain following the Consigment Stock procedure.

On the other hand, even though the Directive has not yet been transposed, we believe that, if a EU company has only one customer in Spain, then VAT registration in Spain can be avoided and the procedure described above for the Call-off Stock can be followed instead.

If you have any doubts, do not hesitate to contact us: we have plenty of experience with such matters.